A week is a long time in politics and no more so than this last week. Last Monday from all accounts of Tory CCHQ there was still a quiet confidence that come election day voters would still back ‘Strong and stable’ May.

Whilst it is easy to mock May for the decision to call a snap election and then spend most of it hiding away from voters and then effectively throw away her existing majority in this vanity project -it is us as a country who will suffer the consequences.

Things have been moving so fast that everything has changed once again – so twitter remains the main way of keeping up to date.. blogging takes too long before things change again.

To save a few paragraphs the quote below about sums up where we have got to!! 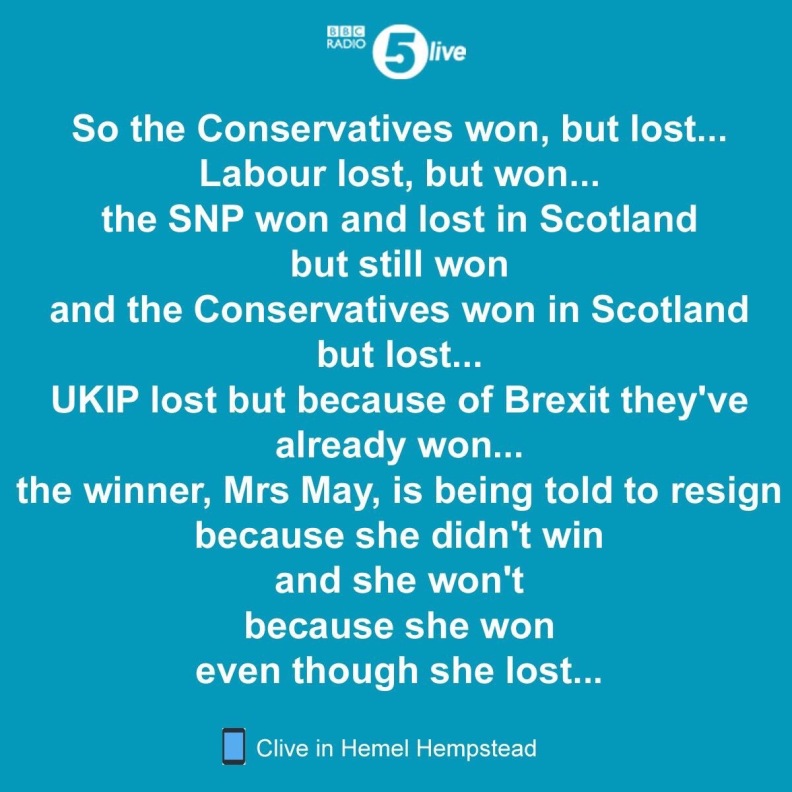 I did mean to blog on the evening of the election. I thought that there would be time during the Loughborough count to add a few words to my initial reaction to the exit poll. As the results rolled in my initial caution at the accuracy of the poll diminished but I had stuck out my neck with the BBC journalist covering the election and predicted a Tory majority of around 5,000 still in Loughborough. We eventually lost by 4,300 in what was a reasonable result. For us in Loughborough battling against a 9300 Morgan win in 2015 it was always going to be too much to do in one effort.

One of the reasons I write down my thought is to show what life is like in a Midlands marginal seat. And this time it is even more important that we remember we still lost here and lost by over 4,300 votes… more than the 3,700 we lost by in 2010.

Before I dive into the reasons to be cautious it is worth joining in the excitement of denying the Tories their desired majority and certainly their landslide. One of the most enjoyable sights at the count was watching Tory smug looks slowly disappearing as the night went on. The progressive Alliance in Loughborough was well and truly alive at the count as we, the Greens and Lib Dems equally cheered each others victories against the Tories as their seats fell.

I did say that if Corbyn won the election I would be the first to offer him an apology and say I had been wrong to suggest he couldn’t win over seats like Loughborough where we need more than the progressive alliance… we need switchers. Whilst I wasn’t wrong I am also big enough to accept that he did better than I thought was going to be the case.

One of my worries is that in all the excitement of not doing as badly as we thought is that many friends have been celebrating as though we actually won! I am sure I don’t have to remind anybody that we actually lost the election. It was a our third defeat in a row. There are some positives to take from the result but pretending a 318 – 262 is a win isn’t good enough. I don’t know if it’s my sporting competitive edge but I am not that keen on glorious defeats. If the Lions come back from NZ with 0-3 loss I won’t be cheering if we played well but lost. In sport at the end of the day it doesn’t really matter, but losing in Politics means non of our manifesto can be put into action. We shouldn’t lose sight of this.

At the weekend we saw the worst of May being repeated in the handling of the result. The robotic repetition of a new mantra. As Osborne observed she is a dead man walking. She is now a prisoner of her own party. They will decide when she leaves, not her!

The Tory Party are ruthless at hanging onto power and will do what it takes to keep control. Short in 2010 they get into bed with the LiB Dems. Scrape home in 2015 and create a Tory government in fear of UKIP and throw it all away in a referendum. In 2017 they will cling onto power with the DUP. There has been plenty written about them over the weekend. They will not be the monsters we are trying to create on Social media. They are smart enough to make this work for the next few years. They too will enjoy the sense of power being IN government brings. Neither of them will want another election soon. They will do all they can to stay in post.

So I know many of my friends are excited at the prospects of power soon. I have revised my expectation of an Autumn election. The Tories will do whatever it takes to avoid it at the moment. The marginal seats exist to make a Tory loss possible.

There is a long way to go in this saga. There will be drama every week. There will be votes that need to be won that will require EVERY Tory to be present. It will be an uncomfortable time for Tory backbenchers and they will wield power over controversial issues where it will only take a handful of them to prepare to rebel to defeat the government. Ironically it may lead to better policy making and government… where there needs to be much more consensual politics within the party.

It is also true that the Lords will feel even more powerful in the new parliament. The Tories won’t be able to overturn the anti-tory majority and the usual caveats about not overturning manifesto commitments won’t apply in the same way. The Tories will be ditching their manifesto anyway!

Once we have more detailed analysis of turnout and more details from the exit polls it will be possible to see what really happened last Thursday. Did UKIP voters split and nto simply return to the Tories as first appeared and did younger people turn out in greater numbers at last to boost the Labour vote. If they did this was a victory for democracy as a whole. For too long politicians have had to chase the grey vote at – I would argue – the cost of young people. Baby boomers – apparently being born in 1964 I am one of them – are generally having it good. It is true I had a free education, got a reasonable final salary pension and was able to afford to buy a house and get on the housing ladder. The hope for many young  people is a life of debt and hard work paying for our pensions! Perhaps at last there will be a rebalance.. as long as young people keep voting!

Returning to the loss in Loughborough I have looked through the patterns of voting for the period we have had the current make up of the seat. In 1992 it was a very different seat with many of the villages like Rothley, Mountsorrel and Birstall included. The 1997 result where we were fighting against a notion 3500 Tory majority was the first to be fought on the new boundaries (changed again slightly in 2010 making it a notional 500 Labour majority)

The seat was lost to the Tories because of the rise of the Lib Dem vote from 2005-2010. In 2010 the Clegg promise to scrap tuition fees cost us the seat as their vote went up to 9600. It has now returned to a squeezed 1900. Most of this has switched back to Labour – giving us the boost. The other parties have been squeezed too. UkIP have disappeared to 1500 from their highpoint of 5700 in 2015. The Greens too were squeezed as Corbyn probably appeals well amongst this group. They went down from 1850 to 971. Fortunately in tight races in the past the Greens didn’t stand in Loughborough, something I will return to in future. I had some interesting discussions across the Progressive Alliance in the last few weeks… I am sure this is a discussion point for the future.

When you look at the shifts in votes it’s obvious the squeeze has taken Labour as far as it can go. Put simply we now need people who still voted Tory last week to consider voting Labour whenever the election comes. Whilst we were celebrating the reduction in the majority for Nicky Morgan she will be pleased that she still got a slightly higher % of the vote (up ,04% to 49.9%) and got even more votes (25, 762) up from 25,762 in 2015 and on a slightly lower turnout. You can see why you need to look at the figures from all angles. This was a vote for the Tories locally against a backdrop of the worst Tory PM I have ever witnessed and the worst campaign we will ever see. They had a manifesto that declared war on its own voters. And they still won. Again coming back to my sporting expertise, we would not take a defeat like this and not analyse every piece of data we have and get the feedback from everybody concerned. You just don’t shrug your shoulders or pat yourself on the back in defeat when there is so much at stake.

I started doing this as you can imagine over the weekend.. and I believe there is a way to win Tory voters over. The ones I spoke to in the focus group I have created made that clear that many had held their noses and voted Tory and if we had a different leader & especially Chancellor they would have voted Labour. Now I know I am going to be abused for even reporting back what I am hearing. But this is the task for Labour still. We can’t just cover over the things we don’t want to hear. How do we maintain the enthusiasm and excitement, but create a level of reassurance about our credibility to win over Tory voters in seats like Loughborough. I have some ideas but I fear in the false self praise amongst the party we will not learn the lessons of this defeat. Whilst I doubt I will ever return to front line politics I will continue to offer my support and experience of switching Tories into Labour voters!   You learn more from defeat and failure. I hope somebody does this analysis as if we lost, not as though we won!