Today sees the publication of another independent inquiry report into the war in Iraq. The Chilcott report is likely to run to over 2.2m words. It is not the first Inquiry.

I am in no doubt that not many of us will read the full report but will be rushing onto social media to pronounce how it backs our pre-held views on the subject. Even as somebody who resigned from the government in 2003 in opposition to the proposed invasion of Iraq I have always understood these decisions are not simply binary and won’t be rushing to comment. I will take my time to absorb what Chilcot actually is saying.

Following the divisive nature of the Euro referendum ballot I am sure today we will see the level of vitriol we are increasingly expecting to see on social media in political discourse. When I resigned in March 2003 I was only subjected to abuse on my telephone and through email. People forget that in the run up and during the early part of the invasion there was a great deal of public support for our victory and toppling of Saddam. At times those of us opposed to the war were in the minority. I was called a coward, traitor and worse by many who saw me as nothing but a left-wing pacifist wimp!

Since the Euro refenedum I am stopped and asked by alomst everybody I see – ” I bet you are gald you are not involved in politics these days”. I am involved – but of course in a very different way.

In vain I am hoping we can have a sensible debate and actually learn the lessons from Chilcot, instead of the politics of the lynch mob. We owe it to those who lost their lives to avoid war at all costs, or where it does happen to make sure we have a plan, and exit strategy, the right equipment and clarity of purpose.

I have written and spoken a lot about my epxerience of being the first MP to resign from the government in March 2003, which does not need repeating today. I still believe we rushed to war before a case was mae and a pre-emptive war was unjustified. But the failure of this foreign policy intervention still haunts our foregin policy decisons today. We also have to take into account the alternative consequences of not acting. I recall being interviewd by Nicky Campbell on Radio 5  ‘one year on’ in 2004 and his first question was “if you had your way Saddam Hussein would still be murdering and torturing his own people – what do you say to that”. As I say. Not everyhting in life is Binary however much we would love it to be for our social media posts. I won’t be commenting further until I have had a good read of as many of the 2.2m words as I can concentrate on!

I know it may be too much to ask, but I hope others might show the same restraint before rushing to cheap meaningless ‘sloganism’. I don’t have much confidence this won’t happen.

As I read and hear more I may update to agree with or challenge online comments and elements of the reporting.

Thanks to Dan Martin at the LEICESTER Mercury for reminding me about what I did as a 38 year old resigning over Iraq. 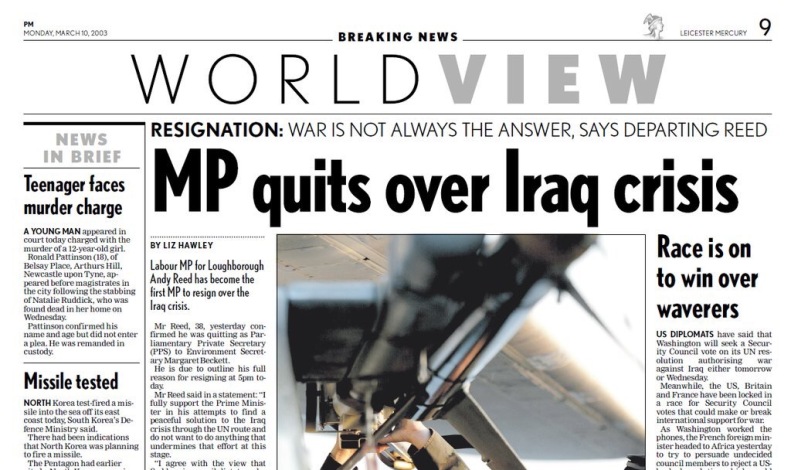 12.00 – 1 hour into the publication of the report. I have now been able to download the full report and executive summary  – The Chilcot website – http://www.iraqinquiry.org.uk/the-inquiry/

11pm – Having  been out all evening I have returned to the late evening news coverage of today and the social media reaction to the report and the response from Tony Blair. Seems very few people are giving his press conference any credibility.

The papers tomorrow seem to be unified in their conclusions too. 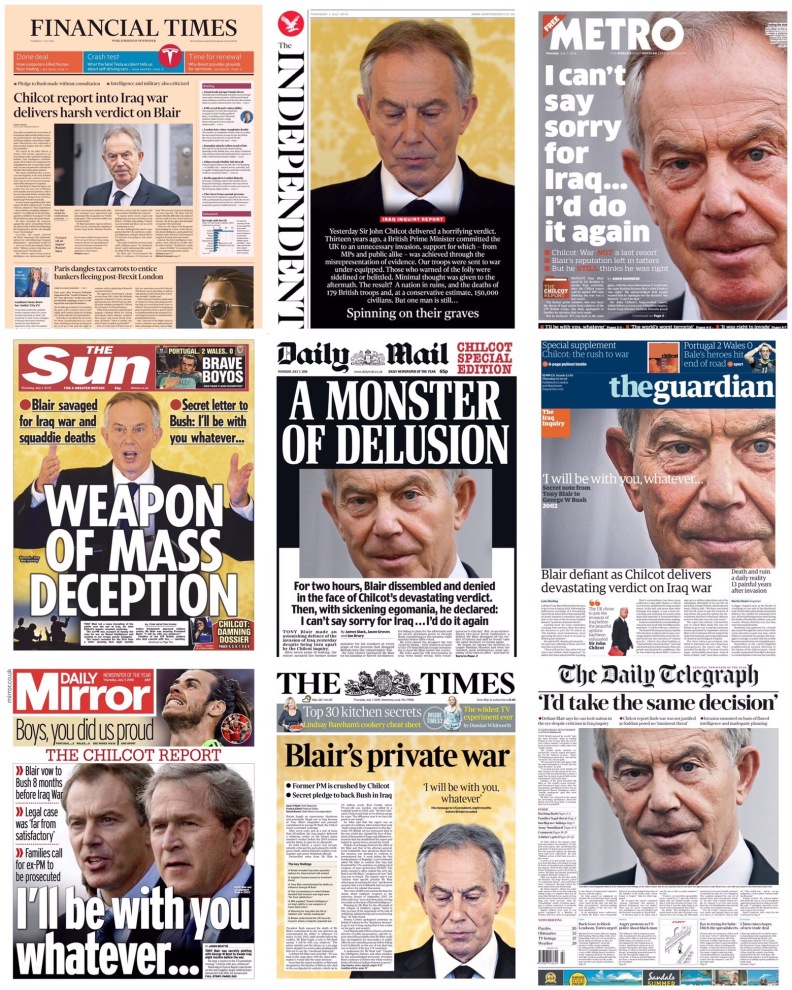