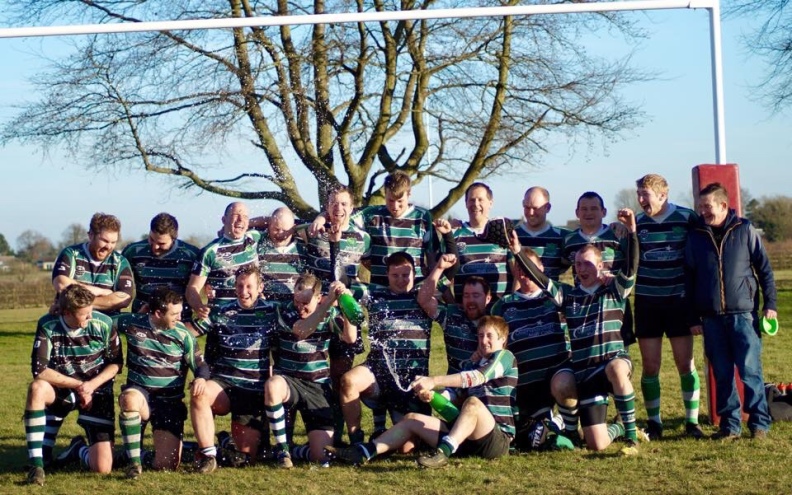 Birstall RFC 2nds crowned League Champions
I have been fortunate to have played rugby in Birstall since I was 11 at Stonehill school. My home ground and pitch is still the same place I learned my trade and made it into the Leics Schools team in 1979! All those years on – and a couple of seasons with Westleigh Colts and Chester RUFC – and I still get the same enjoyment playing community/ grassroots rugby as I have at any stage in my overlong career.

At various times I have moved from centre to wing, and when we have been more desperate I have had seasons at 10 and some at 9. I am now a poor utility back ready to help out!

Many team mates will claim I invented the game of touch all those years ago. I can talk more about the rare tackles I have made rather than the tries scored (more tries than tackles I reckon)

But this year I have the pleasure to play in another side full of lads really wanting to make it a memorable season. I have played in so many sides it’s hard to compare.

These last few years the game has changed and is certainly more structured even at our level. It’s also far more physical as body shapes & sizes have increased. I am certainly heavier than I’ve ever been!

But what has amazed and pleased me has been the level of commitment of the volunteers who have kept this club – like to many in all sports – running even when it has looked like it would all collapse and we would go under. Even now the ambition of the club is as strong as ever and the social side of the club is as lively as I have known it.

I have been very fortunate with my rugby. I have played all over the world with my parliamentary colleagues, playing 10 games at TWICKENHAM (scoring 5 tries), and having played against or with some of the great legends of the game in charity games – including JPR Williams, martin Offiah, Tuilaigi, Rob Andrew, and an entire XV of former Welsh internationals as well as -10 former Aussies and All Blacks.

However glamorous these games were I have honestly always looked forward to playing back at Birstall.

In time I will capture more of my memories at Birstall, but today I wanted to thank this years volunteers, coaches and players who put up with me still playing (i hope they appreciate some of my ‘experience’) It has been a great year and again the quality of the coaching has made a massive contribution to our success. We always have the smallest pack but are well drilled to make up for it. More importantly we have a back 3 who are relatively new to the game and watching them develop into players means I can retire soon happy the club is in a strong position for the future

In some rugby circles I have heard somebody say what does an ex Mph know about rugby? I would say to those ‘old farts’ as so beautifully described by Will Carling – come and watch me collect the post pads or run touch on a Saturday at Birstall! I know I love the game and will serve it for years to come.